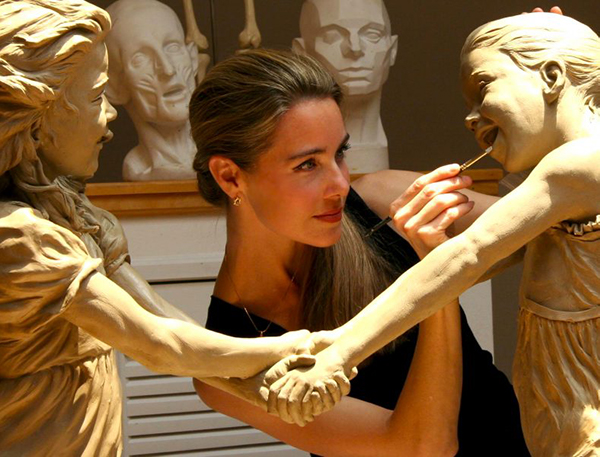 Freedom of spirit is my work's purpose: to uplift and inspire feelings of pure love and joy. My fulfillment as an artist is complete if I feel that my sculpture stirs or awakens personal emotion in the hearts of its viewers.

As I sculpt, I listen to an enduring memory of my own experiences. Each sculpture begins as dramatic light and shadows over form. Unique details then deliver a responding body that listens as a live face does.

Upon signing my works in clay, it is difficult to resist the thrill of creation...I have a strong sense that nothing is finalized; it continues to develop and grow, as do our children. I feel the spirit of life itself is emanating from the sculpture.

Because of the passion that inspires my sculpting, I hope to transmit a complexity of emotions to those who contemplate my work.

Exalting the human spirit through expressive faces and natural body movement has become the recognized trademark of Angela Mia De la Vega’s figurative bronze sculpture. Her work’s greatest inspiration is the ever-changing individuality of her children. Angela graduated Summa Cum Laude from Clarion University of Pennsylvania and completed post-graduate studies at the University of Madrid, Spain. She is an elected member of the National Sculpture Society, a Master Signature member of American Women Artists, and was named a Living Master by the internationally prestigious ARC (Art Renewal Center). Major awards include Best in Show and Best 3D Work by AWA and The Purchase Award by the ARC Museum. Her sculptures are installed in numerous universities, hospitals, public parks and city plazas throughout the USA and privately collected throughout North America, Europe, Australia, Dubai, India, China, and Japan.

Angela cofounded FLITE (Friends Lifting Individuals To Empowerment) whose mission is to harness the power of artistic expression and use it to raise funds and empower enslaved or socially excluded people.

Art Renewal Center is the largest on-line Museum on the internet housing all the known works of the greatest painters and sculptors in human history, cross-referenced to the largest encyclopedic online art reference library of historical texts, essays, biographies, and articles. The ARC defines a "living master" as one who has the rare talent, experience, and expertise to create great humanistic works of art that are seemingly executed with effortless perfection; one who has been trained under the rigorous academic principles of Realism, and mastered every parameter and nuance of great painting or sculpture

Angela Mia De la Vega sculpted her first bronze in 1994 and ever since has been creating figurative bronze sculptures for international collectors, corporations and institutions. Exalting the human spirit through expressive faces and natural body movement has become Angela's recognized trademark. Her work's greatest inspiration is the curious and ever-changing individuality of her children.

“As I'm working, I find the sculpture gradually coming to life. The piece never seems finished; I want to continue its creation but have to push myself to finally let go. Having the concept so clear in my mind, I have already chosen my models: individuals who represent a multiplicity of humanity, glowing with spirit, and shaping light and shadows over form. In the end, I want my work to be remembered as something that inspires and awakens tenderness of spirit - something within us that allows us to stop and appreciate the more important things like family and emotions, especially love,” says the sculptor.

Angela's figurative sculptures emanate unique living spirit - something the artist achieves by truly knowing - and often loving - her subjects. She sculpts in clay her deeply honest observations which reflect even the smallest nuance in character and ultimately reveal an acute, mesmerizing likeness to her model. By providing meaningful insights into human relationships her works allow viewers to look beneath the surface of face and figure into the soul of the subject. This is the strongest appeal of figurative art; and, therefore, the works of Angela Mia De La Vega.