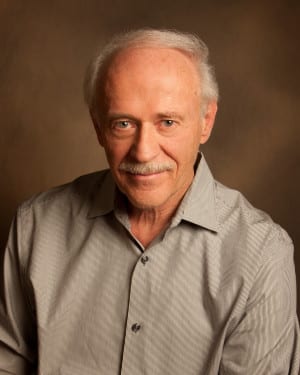 Gary Ernest Smith was born in the rural farm community of Baker City, Oregon in 1942. He exhibited an interest in art at an early age. His parents recognized his talent and encouraged his ability through his youthful years. He was selling his landscapes and portraits while in junior high and high school. After graduating from high school and attending a workshop at his great aunt’s gallery in Lincoln Beach, Oregon, he determined to get a college degree and teach art. Gary met and married musician, Judy Asay in 1967. He completed a bachelor’s degree and was pursuing a master’s degree when he was drafted into the Vietnam War. Following basic training he was assigned to Ft. McLellan, Alabama teaching at an NCO Academy. After a year he was sent to Korea for six months and was released from active duty. Throughout his military service he kept sketch books and developed his art when possible. After military service he pursued his master’s degree in painting at Brigham Young University where he taught part time and served as gallery director at the Harris Fine Arts Center. The friends he knew in college had all moved on by that time and after graduating he decided to pursue a career in painting rather than teach. It was very hard in the beginning and through ten years of commissions and perseverance his hard work payed off.

Gary broke onto the national art scene in 1983 with paintings and sculpture that deal with his rural American roots. The subject matter being both historic and contemporary. He has had more than forty one man and group shows in galleries and museums in the US and throughout the world. His paintings have been displayed in such museums as the Brooklyn Museum of Art in New York, Butler Institute of American Art, Youngstown, Ohio, Eiteljorg Museum of American Art, Indianapolis, Indiana, Denver Museum of Art, and the Phoenix Museum of Art. His work is represented in Private and Museum collections throughout the world. His work has been written up in numerous publications such as South West Art Magazine, Art of the West Magazine, Western Art Collector Magazine, and Western Art and Architecture Magazine. A book on his life and work was published in the late 90’s titled “Holding Ground the Art of Gary Ernest Smith” written by Donald Hagerty.

Gary lives and works at his home and studio with his wife Judy in Highland, Utah. They have four married children and eight grandchildren. The major projects hew has done for the Church of Jesus Christ of Latter Day Saints are: murals for the Nauvoo temple, murals for the Samoa Temple, murals for the Brigham City Temple, and murals for the Provo City Tabernacle Temple. He has individual paintings hanging in numerous temples and church buildings throughout the world. He continues today to produce paintings the church uses for whatever capacity they need.