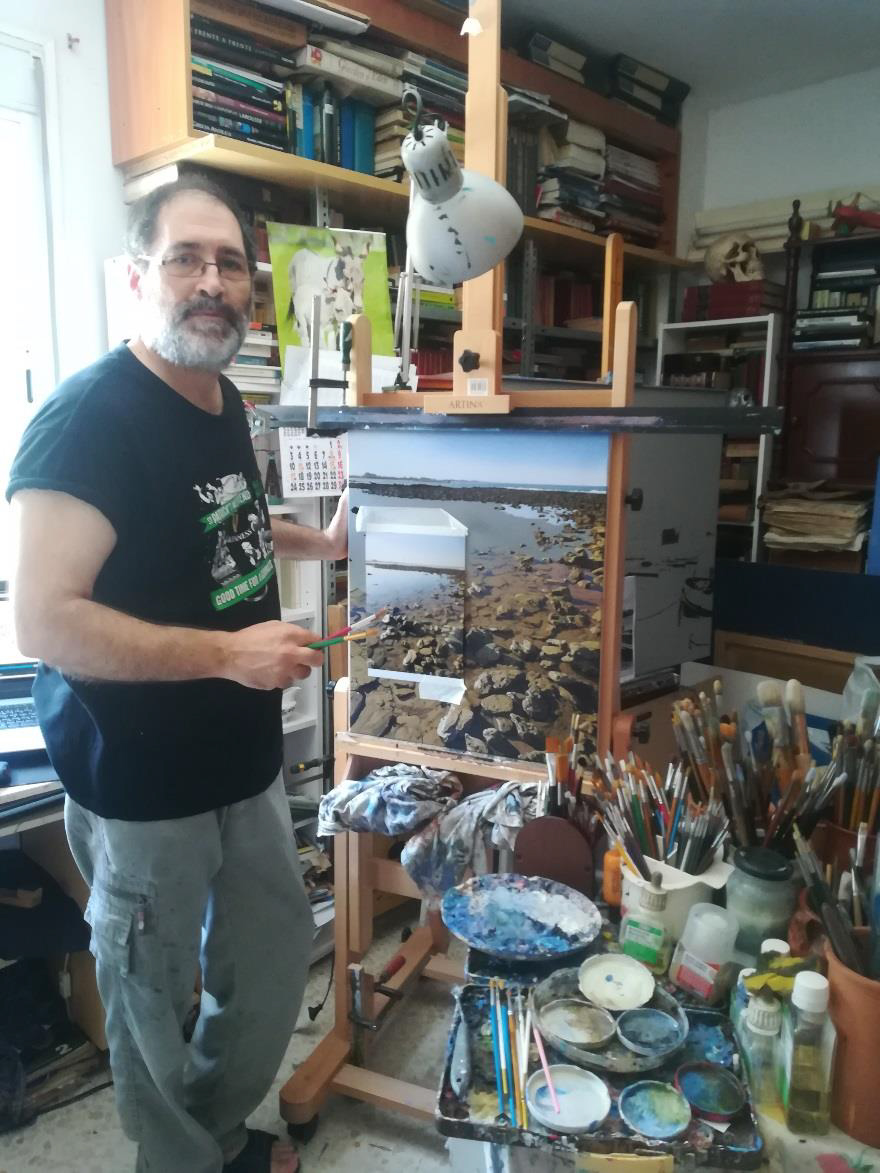 Fuentes combines a multitude of influences and techniques. He cites Surrealism as a foundational source of inspiration, particularly the works of Rene Magritte, Max Ernst, and Salvador Dali. He also credits illustration and comics, abstraction, and expressionism as influential to him, particularly work by artists Pablo Picasso, Marc Chagall, and Henri Matisse. American hyperrealist painter Richard Estes imparts the most discernable impact on Fuentes, as they share a procedure of assembling different photos and perspectives and then complete the arranged image with realist precision.

Drawn to art since childhood, Jose Antonio Fuentes began his artistic career at a young age in the 1960s. At nine years old the Spanish born artist sold drawings to his neighbors and exchanged paintings for gifts with his classmates. An academically gifted student, he ranked higher than his peers and joined older classmates to enter the baccalaureate program at the age of ten. There he completed additional advanced arts courses.

In 1970 Fuentes featured in his first group exhibitions in local and provincial cultural centers. Unfortunately, his academic and artistic career was truncated when his father abruptly left his family, leaving the family in financial difficulty. At the age of fourteen, Fuentes was forced to leave school to begin working and support his family.

After years of both working and saving money, in 1978 Fuentes garnered enough savings to enroll in school at La Marina in Spain, where he was first in his class. Whenever circumstances allowed he continued to draw and paint, participate in art contests, and visit all nearby museums and artists' workshops. Fuentes strongly believes that observing other cultures, landscapes, and people is vital to a painter’s understanding of how to portray the world.

In the early 1980s Fuentes married and began a family. The domestic and financial obligations to his young family prevented the free time necessary to continue painting. Fuentes notes that the postponement of his artistic career to raise his family is never a source of regret as there is nothing more fulfilling than to see his children grow.

As his children grew older in age and required less of Fuentes’s time in the 1990s, he was able to travel more extensively and resumed his cultural tours. He visited cities in Spain such as Madrid, Barcelona, Seville, and Bilbao, and spend countless hours in acclaimed museums and cultural centers including El Prado, Thyssen, Conde Duque, the Sorolla Museum, the Guggenheim Museum in Bilbao, the Picasso museum, the Joan Miro Foundation, and the Tapies Foundation in Barcelona. He also extensively attended exhibition openings, artist talks, conferences and workshops where he learns from masters of realism including Toral, Naranjo, Antonio Lopez, Munoz Vera, Macarron, Leon Olmo, Claudio Bravo, Lapayese, Perez Villalta, Revello de Toro, Eduardo Sanz, Tosar Granados, and Pere Bastos. At this time, he also took courses in psychology which strengthened his artistic compositions.

This direct observation comprises the basis of Fuentes’ education. He notes that while he would have preferred to attend official studies, many of his favorite artists are also self-taught including Tjalf Sparnaay, Michael Kutshe, Charles Bell, Francis Bacon, Henri Rousseau, Yves Tanguy, Gauguin, Van Gogh, Tapies, Clave, Viola, and Dino Valls.

Fuentes now paints full time and continues his unending quest to learn and observe from the world around him.